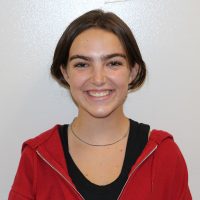 Leah Baumann is a senior at Bexley High School and a sports editor of the Torch student newspaper. Outside of school she plays tennis for the high school and is involved in Environmental Club and MFactor.

From driving to tournaments early in the morning to attending sports camps out of state, every aspiring college athlete makes sacrifices. Committing to a college for athletics is a long process, requiring years of hard work and dedication. College sports give students a chance to pursue their dreams and even the potential opportunity to play […]

The competition cheer teams placed first in two different events after competing in the state championships for the third year in a row Saturday, Feb. 26. Junior Keira Murray explained within the cheer squad, there are two teams: Traditional and Game Day. Traditional includes more difficult stunts and tumbling, while Game Day focuses on getting […]

Director Adam McKay’s latest apocalyptic comedy “Don’t Look Up” examines a larger political commentary about the downfalls of human narcissism when two astronomers are faced with a comet on a collision course toward Earth. The film is packed with incredible actors and comedy, but both are lost in its predictable plot line. The movie follows […]

The girls soccer team ended their season in the state final four this year with a record of 13-7-2, their furthest tournament run since 2009. After winning district semifinals Oct. 27 against Heath 9-0, the girls moved forward in the tournament, beating Granville 1-0 Oct. 30 in the district finals. The game was won with […]

“Squid Game,” the new Netflix series released Sept. 17, is a South Korean survival drama that follows the story of Seong Gi-hun (Lee Jung-jae), who is presented with an opportunity by a mysterious man to participate in a series of games for a cash prize. The series follows a group who enters a game to […]

Juniors Michael Brenner, Grace Elliott and Liam Kauffman Q: Introduce yourselves. A: Brenner: “I am the junior class president. I play varsity soccer and baseball. I also lifeguard at the Bexley pool.” Elliott: “I am vice-president of the junior class, and I play soccer and run track. I am also involved in Environmental Club, Key […]