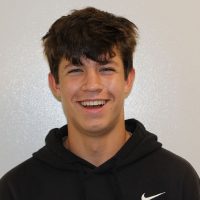 Bennett Bloebaum is a senior at Bexley High School and a sports editor of the Torch student newspaper. Outside of the Torch, he is captain of the football and lacrosse teams for the high school and is involved in the envirothon.

Music is blasting. The sound of weights clanging onto the floor and into each other can be heard constantly. To experience this, all one has to do is go down to the weight room. When strength and conditioning coach Jesse Padgett first arrived in 2019, there were only a few teams that would come to […]

The runner steps into the blocks. His nerves settle and his breath begins to steady. He begins to drown out the cheers and chatter despite the pressure of the situation. He has made it all the way to the top: nationals. This is where junior runner Mason Louis found himself over the summer. Louis runs […]

I sat staring in disbelief at the largest bowl of ice cream I’d ever seen, wondering how on Earth anyone could finish this in six minutes and 40 seconds. I wanted nothing more than to accomplish the challenge and earn back the $20 I had paid to participate. I looked at the massive bowl full […]

The boys and girls cross country teams competed in states Nov. 6, with the girls placing 14th and the boys finishing 20th. Assistant coach Jeff Landis said he was overall pleased with both teams’ finishes, especially with the growth of the girls team throughout the season. Junior Rylee Barno said the girls team made much […]

Senior golfer Robby Meyer made it to the Division 1 district final this year by shooting a 72 at sectionals. Boys golf coach Jimmy Ryan said he was impressed by his playoff performance. “He qualified for the district tournament and played the best golf I have seen him play in four years,” Ryan said. Meyer […]

The high school made the shift from two to four counselors at the beginning of the school year. The four counselors this year are David Leland, Stephanie Krosnosky, Sara Revetta and Claudia Fugate. Leland was one of the general counselors last year, Krosnosky was the college counselor last year and Fugate and Revetta are […]