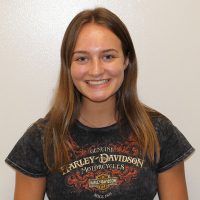 Harley Carroll is a feature editor for The Torch. She is a senior at Bexley High School. Outside of The Torch, she is a captain of the cheerleading competition teams and the vice-president of National Honor Society.

Students 16 and older excitedly rushed to book their appointments with hopes of receiving the COVID-19 vaccine as soon as possible and wishes of a normal summer. Junior Liam Avelluto said he received his vaccine at the Columbus Expo Center. He got the Pfizer vaccine, which is the only available vaccine for those under 18 […]

“He had this aura that drew people in,” said science teacher Josh Butcher of 2019 graduate Eli Weinstock.  Weinstock passed away unexpectedly in March at his home in Washington, D.C. where he attended American University, according to his family. Since his passing, the Bexley Education Foundation has announced a new scholarship fund in his honor […]

After missing their last season due to COVID-19, head coach Jessica Sciacca said softball team members are ready to take on the season, which started Feb. 22, with hard work and determination. Sciacca said this will be her 11th season coaching for the program. “We have something to prove this year,” she said, after missing […]

Pixar’s new movie “Soul” offers an intriguing story about exploring the little things in life and features Pixar’s first Black lead. Produced by the same director as the movies “Inside Out” and “Up,” Pete Docter’s “Soul” is a cute, family-friendly film perfect for all ages with its detailed and eye-catching animations. Joe Gardner, voiced by […]

The new Netflix series “The Queen’s Gambit” not only offers a deep plot and character development that leaves audiences wanting more, but its feminism-driven storyline also adds inspiration for young girls looking to get involved in the game of chess.  The main character, Beth Harmon, played by Anya Taylor-Joy, is a chess prodigy who decides […]

Senior Arianna Martin prepared for her college tour of The New School in New York, her dream school, by grabbing her computer, sitting on her bed, and clicking the play button of the virtual tour video.  Last March, she was excited to go on a spring break trip to New York City, Boston, and Providence […]

Students were surprised on March 7 as Gov. Mike DeWine announced schools K-12 would close for three weeks due to the spread of the coronavirus. They ran home, looking forward to the extra long spring break, but the excitement quickly came to an end as the coronavirus spread. For the remainder of the school year, […]