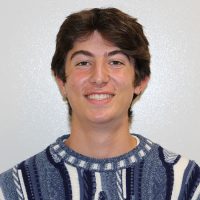 Austin Flamm is a senior at Bexley and is an In-Depth editor for the Torch. Outside of Torch, he is captain of the tennis and In-the Know teams.

The Bexley tennis courts are often filled with players, but they rarely compare to the skill level of current Bexley Middle School eighth-grader Amiya Bowles. According to TennisRecruiting, she is currently ranked first in Ohio and 19th in the nation for the Class of 2026, earning a record of 50-17 on the youth circuit. Bowles […]

Megan Park’s directorial debut “The Fallout,” released Jan. 27, is a moving exploration of student Vada (Jenna Ortega) as she grapples with the aftermath of a horrific school shooting at her high school. The movie begins with a typical school day. Vada fidgets in class, daydreams and goes on her phone, mostly ignoring what her […]

Every day, beginning at 12:01, hundreds of Bexley High School students line up to buy the cafeteria’s food. Each student gradually progresses through the line, picking and choosing their food items. They see the person serving them, and they might make friendly chit-chat with the cashier. However, the kitchen and cafeteria operations are much more […]

Wes Anderson’s new movie “The French Dispatch” is a feat of unique storytelling and vibrant colors. The film is a tribute to magazines, specifically The New Yorker, and the stories they tell. It is not a coherent narrative, but rather different stories told throughout—like a magazine. There are five sections: “The Cycling Reporter,” “The Concrete […]

Over the past few years, we have started to rid our culture of names and traditions that have problematic backgrounds. Among these, sports team names have been criticized for racist connotations. The debate over team names and logos is symbolic of the country’s fight against normalized racism. Teams need to embrace change and abandon racist […]

Junior Cecil Abbott, like the great director Cecil B. DeMille is ready for his closeup. While some students spend their free time playing video games and viewing social media, Abbott has found his passion in watching and reviewing movies. Abbott said that he has always loved movies ever since the swashbuckling tales of Luke Skywalker […]