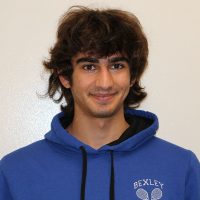 Mitchell Giller is a senior at Bexley High School and is a sports editor for the Torch. Outside of the Torch, he plays tennis and golf for the high school and participates in the Envirothon.

Senior Max Hartman Hartman’s prediction before the finale: A: I thought Genevieve was going to win, but I’m not sure if anyone is going to win. Q: What has your favorite part of the season been? A: My favorite part has been Clayton making bad mistakes recently. It’s been very entertaining. Q: Did you like […]

“Pokémon Legends: Arceus” is an open-world game that provides its players with exciting adventure, despite occasionally falling short in its animations and visuals. The game begins with a character falling through space-time, drifting as the player gets closer to a hole beneath them. As one enters the hole, they emerge in the vast lands of […]

Grace Heilman Senior Grace Heilman put on a show with a record-breaking performance in the girls soccer game against Wellington on Sept. 13. Heilman broke the record for points in a game by recording a total of nine points. In soccer, when a player scores a goal, they are awarded two points, and for each […]