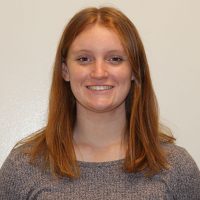 Katie Jude is a senior at Bexley High School and is a co-editor for The Torch. It is her second year on the staff. Outside of Torch, she is a co-captain of the soccer team and secretary of Key Club.

Orange day-lily. Rose of Sharon. English ivy. All of these beautiful, eye-catching plants can be found adorning numerous homes throughout Bexley. However, aside from their beauty and prevalence, each of these plants has another thing in common: they are not native to Ohio. Senior and president of the high school’s Garden Club Josh Bahar observed […]

Officers and therapy dogs from the Franklin County Therapy Dog Program visited the high school March 23 from 10 a.m. to 12 p.m. to promote wellness within the school community. High school counselor Claudia Fugate said that the event took place in the gym and was available to all students and staff members. She added […]

When taking a drive down Main Street in Bexley, there is one property that stands out against the quaint shops and restaurants lining the road. With its sprawling front lawn and towering sandstone columns, Montrose Elementary has welcomed and educated generations of young learners, and now prepares to celebrate its 100th birthday. Montrose originally served […]

At the beginning of each school year, the hallways overflow with new faces. New students and teachers alike are eagerly welcomed into the school community. This year, however, one new face in particular has been in the spotlight of Bexley Schools: Superintendent Jason Fine. Fine, who was hired last spring, said that he grew up […]

For many kids, the summer camp experience is defined by spending hours under the sun, swimming, kayaking or partaking in other enjoyable activities. However, for senior Kate Sullivan, that fun experience was quickly spoiled. In July 2019, at around midnight of her first night of camp, she awoke in a daze surrounded by people. “I […]

Each year, as the last remnants of snow melt from the ground and the first signs of the approaching summer season show themselves, families and friends alike gather outdoors to enjoy the weather and each other’s company. On any sunny day, it’s a typical sight to see groups convening to play lawn games such as […]

Katie Jude  Staff Reporter  If one was to compare their schedule today with that of exactly one year ago, it is likely that the contrast would be quite severe. Last spring, many people’s schedules were still teeming with social activities such as sporting events, parties and concerts.  However, those social gatherings were quickly wiped from […]

The girls lacrosse team is set to begin their season with a home opener against Westerville Central on Thursday, March 25 under the leadership of new head coach and Latin teacher Jackie Lund. Lund said she is replacing the former head coach and will be joined by Bexley alums Kate Bridge as JV coach, Hunter […]

A resolution recognizing Juneteenth as a day of celebration in Bexley was unanimously approved at the City Council’s Tuesday, Dec. 1 meeting.  The resolution was originally proposed by City Council member Jen Robinson. Robinson explained that Juneteenth is observed each year on June 19 to celebrate the day that the news of emancipation reached the […]