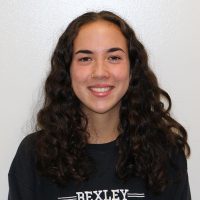 Claire MacDonald is a senior at Bexley High School and co-editor of The Torch. Outside of Torch, she swims and runs cross country and track for the high school.

It is your holiday season, but there are no lights strung up around your town. No music relevant to your holiday plays in department stores or coffee shops. Your extended family cannot come visit because they are unable to miss work for the week. You must go to school and try to celebrate in the […]

The sweet melody of a church organ floated out of the St. Alban’s Episcopal Church’s doors on the morning of Sunday Sept. 26, propped wide open to welcome both regular attendees and newcomers. There were three services offered this Sunday: 8 a.m., 10:15 a.m. and 3:33 p.m. I entered the church for the first time […]

The pancreas: a small, seemingly benign organ located in the stomach. Many will not pay this vital structure much attention unless forced to fill out a sheet labeling organs in a class. Others might only see it when staring at a fuzzy photo of the stomach on a biology test, quick to forget what and […]

Emerging as an early childhood hobby, senior Sammi Nack’s love of horseback riding has continued into her high school career, shaping her work ethic, competitive mindset and future goals. Nack said that she began her venture into horseback riding at 8 years old. “I went on a field trip for Girl Scouts to Marmon Valley, […]

Student Council is holding its annual charity month fundraising events in an adjusted form due to COVID-19’s restrictions. Student Council events chair and junior Quinn Hall explained that charity month is a collection of events conducted yearly by the group in which various fundraisers are held to raise money. Three events are being held: a […]

Every president wants to leave a legacy behind, one that is consistent with the agenda they have set during their time in the White House. Donald Trump has certainly accomplished this goal. Throughout and before his years in office, Trump has often blamed minorities for problems in the United States. As he departs, Trump will […]

The year began like any new year. Party-goers hugged and cheered as the ball dropped at Times Square. Families wrote resolutions: to go to the gym more, to visit their elderly parents. Students vowed that this year would be the one where they worked the hardest in school and procrastinated the least.  Then, in March, COVID-19 […]

Jolted awake from a nightmare, you sink back into your pillows, relieved that you won’t have to experience that dream again. Some people, however, must live with the knowledge that their nightmares will come back to haunt them. Junior Lin McDow said that they have experienced the recurrence of the same nightmare for almost eight […]

The district hired a new orchestra teacher, Steven Spangler, to replace long-term substitute teacher Rachel Orthin in late June as a full-time teacher at the school. Principal Kristin Robbins said the search for an orchestra teacher began later than usual. Normally, the search would begin in May, she explained, but at that time the district […]