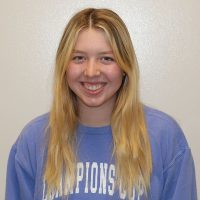 Emma Magee is a senior at Bexley High School and a news editor for the Torch. Outside of Torch, she plays volleyball and lacrosse for the high school.

Three sessions of “Hey Bexley Let’s Talk Equity” discussed the “Nice White Parents” podcast, produced by The New York Times, between March 31 and April 15. Coordinator of Experiential Learning and Community Engagement Steve Shapiro explained that these sessions operated like a book club, with the podcast serving as the book. Community members learned about […]

Students are required to wear two masks, or an equivalent, in the school at all times as a result of going back all-in Tuesday, March 23. Interim Superintendent Dan Good said students can wear one cloth mask over a paper mask or any mask that is the Center for Disease Control and Prevention equivalent of […]

The English Resource Center reopened for the first time this school year at the beginning of the second semester, offering both virtual and in-person options with former library aide Neal Tomich as the new director. Tomich said the ERC will be open to students before school from 8:00 a.m to 8:30 a.m, during all seven […]

The high school’s Focus on Freshmen program, designed to help freshmen adjust to high school life, started its second year with a session on Tuesday, Oct. 20.  Principal Kristin Robbins said the program meetings cover study strategies, time management tips, what resources to use if the students are struggling with a class and check-ins regarding […]