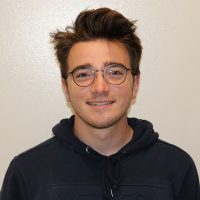 Nikolas Robinson is a senior at Bexley and is a news editor on The Torch. Outside of school, Nikolas plays soccer and is a part of the stage crew.

Bexley High School students took the Panorama Survey in late October during their study hall periods to measure student perceptions of the school environment. Assistant Principal Craig McMillen said that the questionnaire also focuses on students’ levels of grit, perseverance and ability to learn in the classroom. McMillen said he feels very passionate about the […]

Acts of vandalism in the school bathrooms occurred from Tuesday, Sept. 14 through Monday, Sept. 20. The defacing acts in the bathroom are known as “Devious Licks” which, according to Kristen Mei Chase from The Washington Post, are part of a trend on the social media platform TikTok where students steal objects from the school […]

Each department in the high school was responsible for making videos and lectures that would feature important African Americans for Black History Month. Social studies teacher Scott King-Owen said that there was a committee of members from the district who were tasked with designing ways to educate students on influential African Americans. The committee, […]

It was a night just like any other for junior Porter Neff when he was in the fourth grade. His reading light and novel were the only things protecting him from his worst nightmare, as sleep paralysis episodes had become a nightly occurrence for him. Sleep paralysis is the temporary inability to move or speak […]