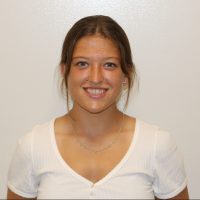 Sydney Tyler is a senior and a sports editor for The Torch. Outside of Torch, Sydney plays soccer and lacrosse and is a part of the Key Club and Book Club executive board.

The swim teams competed in the state meet Feb. 24-26 at the Canton Hall of Fame Aquatic Center with the girls and boys finishing 16th and 29th, respectively. Six swimmers qualified for the state meet and each of them broke at least one school record at districts. At states, four additional school records were broken. […]

Although Title IX granted women greater involvement in sports, female athletes have continued to be discriminated against, especially at the collegiate level. For many years, female athletes have been characterized as weaker and worse than their male counterparts, so they have experienced acts of gender discrimination. Most recently, in the 2021 March Madness basketball tournament, […]

In October 2020, Drake announced he would be releasing the album “Certified Lover Boy” in January as a follow up to “Dark Lane Demo Tapes,” but after injuring his knee, he delayed the release and dropped a shorter album, “Scary Hours 2,” in the meantime. Drake is undeniably one of the most accomplished and consistent […]

When people consider their personal characteristics, they don’t tend to consider how the positions of the sun, planets and stars influence them, but those who follow astrology believe the movement of these celestial bodies are the reason for each person’s personality. In ancient times, people used an imaginary line in the sky to determine what […]

Following the COVID-19 shutdown last March, the baseball team is preparing to return to play with a smaller varsity team than in past seasons. Coach Joe Krabill said he is looking forward to coaching for his first full season at the high school, but he acknowledges that it will take effort to succeed. “We were […]

While the Ivy League may not be for everyone, senior Leah Tadese had always believed it would be a perfect place for her. Ever since she was 7 years old, Tadese knew she wanted to go to Harvard. Her dreams became a reality in December when she received her acceptance letter. Tadese explained that she […]

For the fifth year in a row, the cross country team competed in the state meet at Fortress Obetz stadium, Saturday, Nov. 7, with the girls and boys varsity team finishing 10th and 16th, respectively.  Junior Claire MacDonald and senior Maria Steinke were the top two finishers on the girls team with times of 19:38.9 […]

After an unconventional fall sports season, winter sports are expected to begin in the coming weeks, and despite health and safety worries, coaches are ready to implement whatever measures necessary to ensure an exciting and successful season.  Girls basketball coach Bryce Baugh said safety is on the forefront of coaches’ minds entering a season predominately […]

COVID-19 disrupted the lives of many Americans this year, forcing them to adapt to many new protocols to ensure safety. In response to the pandemic, the district’s administrators settled on a series of phases to reimplement fall sports into student life. As set by the athletic department, the phases included a non-contact phase with pods […]